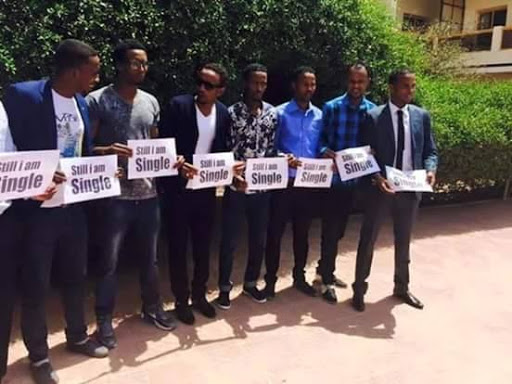 A group of single men have gone public to protest over the inflated dowry in Somalia. In the photos, the Somali men holding signs that read ‘Still I am Single’, where said to have held
their protest at the Mansoor hotel in Hargeisa. According to them, they said the brides’ parents are extorting men through the inflated bride price in the country.
Has marriage become an expensive affair these days where you live? there have been stories of people spending millions of dollars just for that one special day.
There have also been stories of men complaining of what women make them go through for that perfect wedding.
Does what is spent on a wedding say anything about the love between couples and maybe something about how long the marriage is going to last? do these things even matter at all or what matters is that there has been a wedding?
Some men are now up in arms against what they say is an expensive affair to even think of marriage.
Single men in Somaliland who are saying are eligible bachelors are protesting against marriage costs saying day by day they are just spiraling.
According to a story on Somaliland Nation News , to get married in Somaliland, a young man has to have a hefty sum in hand.
Estimates range from US$10000 t0 $15000.
SOMALI MEN 2
However there are fears that the high costs of marriages, has contributed to a fall in marriage statistics, pushing further and further the age in which young Somaliland men get formally married.
This figures however may make someone in Nigeria or Uganda actually surprised because for such ceremonies in those countries, it is matter of status on that particular day.
In these countries, if you want a wife you must cough your all.
It was only a few months back that religious clerics in Somaliland set the betrothal (meher) price at $500, calling on marrying couples and their families to keep down the cost of marriage and to clip the long process leading to the establishment of a ‘married’ household.
Islam does not condone high dowry prices or extravagant marriage ceremonies.
The protest by the single men had a largely positive, impact on social media circles in the region.

I'm a teacher, blogger, web developer, digital marketer, and entrepreneur. I own ShataGhana.com, ShataAfrica.com, Thedigimall.com and newsstandgh.com. They are all subsidiaries of NabsTech - an IT and Media firm. Contact me on (233) 0544488286/0551352790 or email me at [email protected] Thank You.
@emryswalker
Previous New banger Dropping soon: EFFAHTIC ft Olamide (GH – Nija Collabo)
Next 5 signs to tell if a man is a virgin