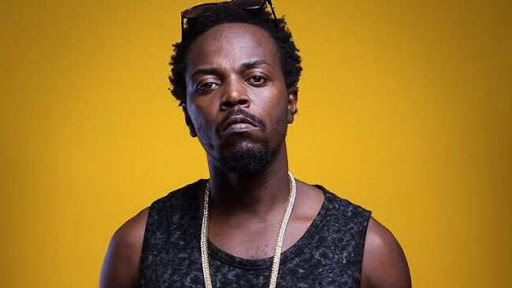 Musician Kwaw Kese has in a shocking revelation said he sold some of his VGMA awards last weekend in a show of protest against the declining value of Ghana’s biggest night in the music industry.
He was pictured pushing a wheel barrow containing all his VGMA trophies with inscription “Awards for sale” looking fierce in black leather jacket and trousers.
Kwaw Kese said in a newspaper interview that he sold his awards for GHC2,500 with the exception of the Artiste of the Year award which he said was pegged at GHC250,000, way too high for interested buyers.
“I managed to sell some of the awards on Saturday and although I did not have a fixed price, I sold them depending on the condition in which the awards were,” he told Graphic Showbiz.
“The plaques that were in good condition went for a higher price while those that were cracked or chipped sold for much lower, ” he said.
Kwaw Kese explained that his decision is in protest against the way and manner undeserving artistes are awarded.
“There is a huge question mark against the awards because it appears the ultimate award goes to whoever publicly criticises the scheme. Some years ago, Shatta Wale publicly criticised the scheme and he received awards the next year.
“The gospel fraternity threatened to boycott this year’s awards and suddenly we have a gospel artiste winning the ultimate award,” he said.
“Many people are not happy with the way Charterhouse is conducting the awards lately and we have to come out and speak against it. Ghanaians are still in shock over the winner this year and this is not right.”
Asked what he used the money he generated from the sale of the awards, Kwaw Kese said he used it purchase studio time to record a new single, Overspeed.
“I also used the rest [of the proceeds] to shoot a music video for another single, FDN, which is addressed at the VGMA board, Charterhouse and everyone involved in the VGMAs,” he said.

I'm a teacher, blogger, web developer, digital marketer, and entrepreneur. I own ShataGhana.com, ShataAfrica.com, Thedigimall.com and newsstandgh.com. They are all subsidiaries of NabsTech - an IT and Media firm. Contact me on (233) 0544488286/0551352790 or email me at nabigakelvin@gmail.com. Thank You.
@emryswalker
Previous GES frustrated over growing number of teachers changing their date of birth
Next Fast rising and talented rap artiste; Kweku Darlington, has released new promo pictures to launch his new song “SHOUTOUT”