John Terry to leave Chelsea at the end of season 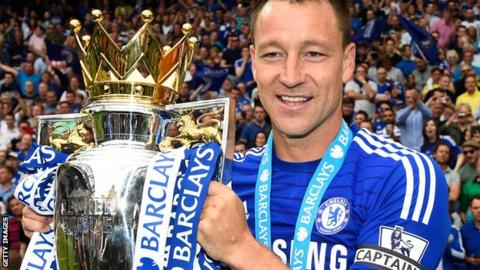 John Terry and Chelsea Football Club today jointly announce our captain will leave the club at the end of the season. Everybody at Stamford Bridge would like to express our enormous gratitude to John and wish him the very best of luck for the future.

John has given us more than two decades of dedicated and exceptional service. In that time he has displayed the utmost pride at wearing the Chelsea shirt, something he has done on 713 occasions since his debut in 1998, scoring 66 goals.

He is the club’s third highest all-time appearance-maker and has captained Chelsea a record 578 times. This season he has featured less on the field but remained an influential and inspirational member of the squad which, under Antonio Conte’s guidance, sits top of the Premier League.

Throughout his career ‘JT’ has contributed immensely to us achieving consistent success unequalled in the club’s history. He has won the Champions League, four Premier League titles, the Europa League, five FA Cups and three League Cups.

His 14 major honours make him our most decorated individual of all time. Terry said: ‘After 22 years there is so much to say and so many people to thank at this great football club. From coaches, team-mates and staff to the fans who have given me so much support down the years, I can’t thank you enough.

There will be opportunities for me to speak further about this over the coming weeks. ‘I will decide on my future in due course, but for now I am committed to helping the team achieve success this season.

‘The club and I have always had a fantastic relationship, which will continue beyond my playing days. We had some really positive talks but with everything taken into careful consideration I have decided it’s the right time for me to leave.

I’ve always been conscious that I depart at the right time, in the right way, and I feel that the end of this season is the right time for the club and I. I feel I still have plenty to offer on the pitch but understand that opportunities here at Chelsea will be limited for me.

I’m eager to carry on playing and so will be looking to continue with a new challenge. I will of course always be a Blue and am desperate to end my final season as a Chelsea player with more silverware. ‘Finally, words cannot describe the love I have for our football club and our amazing Chelsea fans.

I would like to thank each and every one of you from the bottom of my heart for the unbelievable support you’ve shown me over the years. You mean the world to me and every trophy we’ve won during my time at the club we’ve won together. I will never forget the incredible journey we’ve been on. Thank you so much for everything.’
Chelsea director Marina Granovskaia said: ‘Everyone at Chelsea would like to place on record our thanks to John for all he has done for this football club.

He has been an outstanding player, inspirational captain and has always demonstrated an exceptional commitment to the cause.

‘In that time, Chelsea has grown into one of the world’s top clubs and it is only right that John’s contribution is recognised.

He will always be held in the highest regard by everybody at Stamford Bridge and we look forward to welcoming him back in the future.’

Both the club and John look ahead to the possibility of him returning to us in a non-playing capacity, when he will be able to share his unparalleled experience with players, staff and fans alike.

John’s outstanding qualities as a footballer, particularly his defensive skills, have deservedly received widespread recognition and admiration.
He is one of just five defenders to have won the PFA Player of the Year award and was named in the FIFA/FIFPro World Team of the Year five seasons running.

He is both the club’s and the Premier League’s all-time top-scoring defender and earned 78 England caps before retiring from international football in 2012. His longevity is testament notonly to his ability but also his professionalism and dedication.

Countless times he returned early from injury, playing through pain but never allowing his performances to drop, and repeatedly putting his body on the line and in the way of opposing attackers, all for the benefit of Chelsea Football Club.

He is, as the famous banner reads, our captain, leader, legend, and we wish John the very best of luck in the next chapter of his magnificent career.
–
Source: Chelsea Football Club

I'm a teacher, blogger, web developer, digital marketer, and entrepreneur. I own ShataGhana.com, ShataAfrica.com, Thedigimall.com and newsstandgh.com. They are all subsidiaries of NabsTech - an IT and Media firm. Contact me on (233) 0544488286/0551352790 or email me at [email protected] Thank You.
@emryswalker
Previous Kofi Kinaata – Confession (Official Video)
Next Wizkid – Ghetto Youth (Prod. Sarz)

Report: Real Madrid order Zinedine Zidane To give up on Paul Pogba chase