I never had sex with Kofi Adjorlolo – Victoria Lebene

I never had sex with Kofi Adjorlolo – Victoria Lebene

Victoria Lebene Mekpah has disclosed that she and her ex-boyfriend Kofi Adjorlolo never had sex during their dating period.

The love birds prematurely broke up after Lebene’s father objected to the planned marriage arguing that the actor who is in his late 60s was way older his 26 year old daughter.

According to her, she denied the veteran actor anytime he requested for sex adding that she was waiting to be married.

Lebene debunked claims that Kofi Adjorlolo spent lots of money on her during their dating saying she paid her own trips.

“We never had sex though; because we were waiting for the marriage before that. I was really bent on that because I was looking forward for him to fulfill (marriage). He did ask me for sex but I always pushed him back because I wanted to wait. He didn’t do much for me; like buying me a car or supporting me to buy a car. I took care of my own trips and took care of myself, I paid for my trips around the world through my hard work,” she told KOD on the Zone. 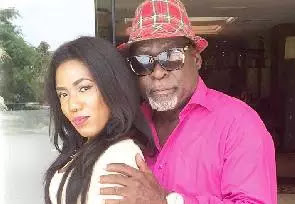 I'm a teacher, blogger, web developer, digital marketer, and entrepreneur. I own ShataGhana.com, ShataAfrica.com, Thedigimall.com and newsstandgh.com. They are all subsidiaries of NabsTech - an IT and Media firm. Contact me on (233) 0544488286/0551352790 or email me at nabigakelvin@gmail.com. Thank You.
@emryswalker
Previous How we killed Mahama’
Next [Music] Nana Boro X Donzy – Akiti (Prod by Streetbeatgh)