How we killed Mahama’ 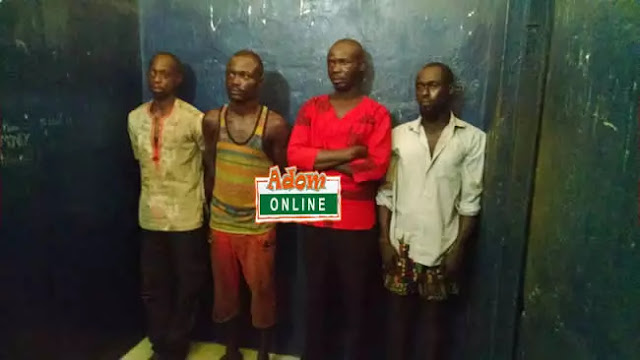 How we killed Mahama’

Kojo Fordjour, one of the 14 persons on police wanted list over the murder of Major Maxwell Adams at Denkyira-Obuase in the Central Region, has vowed to give a blow-by-blow account of circumstances leading to the death of the soldier.

The accused, a driver, Thursday told the Accra Central District Court that he would tell the court everything he knows about the murder of Major Mahama.

Charged with conspiracy to murder and murder, Kojo stated that God is his lawyer.

According to the prosecutor, Detective Inspector Simon Apiorsornu, the accused persons and 19 others, currently at large, acted together with a common purpose to murder the soldier.

He said, “Kojo, who took active part in the lynching of the soldier, bolted from Denkyira-Obuasi after the incident.”

D/Insp. Apiorsornu disclosed that the accused admitted having in his possession the deceased person’s mobile phone, adding that the prosecution was going to consolidate its case in view of their latest arrest.

This brings to 20 – including a woman – the number of persons charged over the gruesome murder of the 5 Battalion of Infantry soldier on May 29, 2017.

They have been provisionally charged with conspiracy to murder and murder.

Major Mahama was the commander of a military detachment stationed at Diaso in the Upper Denkyira West District of the Central Region to check the activities of illegal miners (galamseyers).

He was lynched by a mob, who took him for an armed robber.

I'm a teacher, blogger, web developer, digital marketer, and entrepreneur. I own ShataGhana.com, ShataAfrica.com, Thedigimall.com and newsstandgh.com. They are all subsidiaries of NabsTech - an IT and Media firm. Contact me on (233) 0544488286/0551352790 or email me at nabigakelvin@gmail.com. Thank You.
@emryswalker
Previous Pastor raped by three women when he confronted them about money they owed
Next I never had sex with Kofi Adjorlolo – Victoria Lebene