Celebrities come and go. They can either stay for a couple of years, but some fail to carve a niche in the entertainment industry and remain a starlet. Some are successful and become iconic in the music scene, television and movies.

You might be wondering why some of them have disappeared in the industry. If you observe their stellar status, the luckiest are those who share common characteristics that made them rich and famous.

Take a peek at the 8 common characteristics famous celebrities have in common. Find out if you have any of these traits that can be helpful in your chosen profession.

1. Strong determination and confidence. Celebrities are confident and determined to pursue their goal no matter what happens. They are the kind of people who do not care about what others say when they pose nude in a men’s magazine or wear a bizarre outfit. Getting out of poverty and to become famous are two things that prodded them to try their luck in Hollywood hoping that they could find the right people to help them in their budding career.

2. Their work ethic is infectious. Actors and singers are deprived of sleep as they have to stay awake until the following day to finish their commitment. They work hard not only because they know that they are highly compensated for their efforts, but because they want to leave a legacy when they are no longer active in the industry. Highest paid actors only spend 2 to 3 hours of sleep until their project is finished. But the prices they get from being workaholics can buy them a new house, a car, a set of jewelry and a swanky bag.

3. They work for the sake of art. Multi-awarded actors are choosy in their roles despite the high talent fee that they could receive for a particular project. Top caliber actors who have become financially stable would pick meaty roles that could earn them an Oscar award. They don’t mind if they have to go bald or topless for as long as the role will increase their level of creativity and transform them into a respected actor. Some celebrities accept roles that are challenging even if they don’t share the same billing stature with the main actors.

4. They are creative and unique. Famous Hollywood personalities defy the standard and social norms. They never stop creating and reinventing themselves to enable them to catch the public’s attention. Miley Cyrus, Madonna, J Lo, Michael Jackson and to name a few, had their own strings of gimmickry and controversy to promote their albums or movies. Even local artist in some key cities in the world do the same thing even if it could ruin their reputation and make them infamous. Defying the norm and ignoring their bashers is the best action that celebrities must do to succeed in their showbiz career. Gossips are part of showbiz and welcoming them with an open heart can make them stronger and better celebrities.

5. They think, believe and dream big. True artists think that there is no small role for them. Budding actors must heed what their veteran counterparts say that in order for them to be recognized and earn big, they should accept any role that can hone their acting prowess. Since the competition in the world of showbiz has become stiff, they must grab every opportunity that comes their way. Not unless they are products of reality shows or beauty contests, penetrating the entertainment industry is a bit hard. Changing their mindset from small to big things will inspire them to strive hard and make it big in showbiz.

6. They have a high emotional quotient. Although beauty and talent are important things to consider when discovering a new talent, movie directors and producers would prefer actors with a good work attitude. Celebrities who are acting like divas will most likely to lose their chance of getting the right break because their attitude can cause a lot of problems during location shooting. High EQ celebrities come to work before call time and they do not cause glitches or delay at work. They can mingle with anyone in the set from the director to the janitor. They can laugh at their own mistakes and can exchange jokes with their fellow workers, even if they have been sleepless for several nights. Most of all, they welcome strangers and mobbing fans for autograph and photo ops.

7. They enjoy every bit of their work. Become passionate about your work as an artist in the real sense of the word will give you more inspiration to hone your craft. Celebrities who are enjoying their career are the one who will become successful as they do not get discouraged when failure comes in one point of their lives.

8. Money and fame are only secondary. These two things that can lead to frustration if celebrities are unable to achieve them. Some famous celebrities who are getting less projects and their fans are ignoring them have become depressed and suicidal. This is because they think that money and fame are the most important things in life. But the truth is, any career that is taken with passion can be a great source of your finances if you know how to save your money.

Celebrities who have lost their careers because of their bad attitude have realized that becoming famous and wealthy does not happen overnight. They have to learn the traits that could propel their popularity and eventually land them a lot of projects.

Aspiring actors/actresses who are given the break should realize that the competition is so high in the industry. A single flaw is observed from you could put you down and it would be too late to realize that a newcomer will soon replace your position in showbiz. Getting rich quick is a mere fantasy as you need to start from scratch, and when you are already at the top of your success, remain humble and grounded. 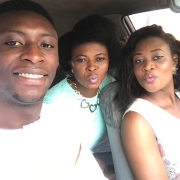 A music lover and entrepreneur

I Strongly Deserve Artiste Of The Year Award, Not Even…Can Stop Me. Who??-Patapaa Speaks Again